The excellent diving conditions continued as we head out for the fourth boat dive in the last week. Blackhead is not renowned for it's clear diving conditions, but today we can see the reef from the boat. With 8 divers on board, we have plenty of people to complete both Marine Debris surveys and a Reef Life Survey. This is my first RLS for over 12 months, and I am as rusty as the old pick anchor I tie the transect line off too. It is beautiful conditions, 22deg, 15m visibility, but hardly a fish to be seen, unless you count the scad, the parma and the mado...which Brian and I try in vein to do accurately. At 18m, this reef is remarkably repetitive. The lack of fish diversity is made up for by the corals, sponges and other benthic life. Snapper Rock has a variety of small plate and encrusting corals and unusual sponges, unlike anything we see in the south. Ascidians and sea stars, yellow nudibranchs and large wobbegongs hiding in the crevices make for an interesting dive. The debris crew recover a fair bit of fishing debris, as usual on this site, and JD brings up a nice reef anchor.
After a quick visit in at Wallabi Point, we head south to Redhead Gutters. Rachel and I do another RLS, while the others search for debris. This reef is shallower, at 11m, has sandy gutters, kelp covered reef and some overhangs. The fish life is again, fairly bland, apart from two very exciting species - two sub-adult black cod and one eastern devil fish hiding in the over-hangs. Masses of bulls eyes congregate in a small cave, and the other usual suspects cruise by in large numbers - scad, mado, and the girdled parma. I also see a very sweet Pseudoanthias squammipinnis. No debris was found on the transects, but a bundle of hooks and swivels were recovered by Heather. The water was 23deg, and we had a pleasant dive of 51 minutes. The water was more turbulent here, with about 7m visibility.
Posted by Great Lakes Underwater Group at 4:21 AM No comments:

Excellent weather / water conditions allowed us to dive Little and Big Seal Rocks in near perfect visibility. Our first dive was Little Rock, where we were disappointed to see three spearfishers within the sanctuary zone. "only looking" was their response to our questions. mmm, dubious. We anchored on the western ledge in 13m of water. A strong current saw the anchor drag all the way to the southern gutter, where we diligently ran our 100m transect, found one soft lure, then ran out of time/air due to the physical exertion required to make any headway in the current. The area was void of fish (who were off in the sheltered areas no doubt!) but I saw some nice nudibranchs, interesting benthic life, and the warm, clear water was most enjoyable. 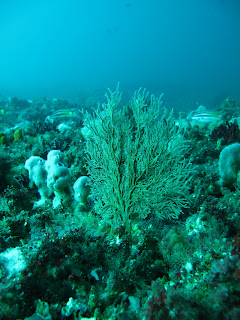 Gorgonian Coral at Little Seal Rock.
We motored over to Big Rock, where we came upon another boat of spearos, who were also 'only looking'. What a pity the government has cut funding to Marine Parks. These people should be fined every time they enter a pink zone with fully rigged spear-guns. Nick jumped in while we had our interval, and tucked in behind the island, the current was no issue here. After a lengthy break, watching a large pod of common dolphins cruise by, a turtle pop up down in the current and sharks feeding on the surface, we jumped into the lovely (23deg) clear water, and landed in the gutter, where at least 50 grey nurse sharks loitered around their favorite overhang. Suzanne, Dana and I were thrilled to be circled by the resident loggerhead, who looked as though he was waiting for a treat. The clear water enabled us to take lots of great shark shots, many of which should be good for the boys at spot a shark. A wonderful dive left us all buzzing for many days to come. 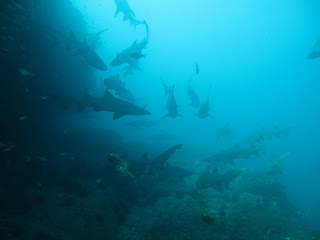 Sharks hanging out in the 'cave' 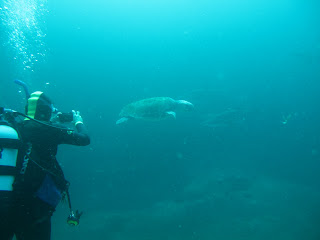 A week of dirty water at Seals forced us to dive off Forster. At the top of the tide, The Barge was chosen for it's resident shark population. Seven GLUG divers entered what appeared to be clear water. At about 20m, the visibility declined, and sharks abounded. Greg and Anita went in search of the perfect shark shot, Anita enjoyed the company of about 8 sharks circling her so closely, she could have stroked them. The rest of us laid 25m tapes and searched for debris. Heather found a stainless steel cable - the remains of a large portion of net that was recovered two years ago. A whopper wobbegong hid below the wreck, waiting in hiding to strike the next likely prey...or divers hand, which ever took it's fancy first! Luckily, no wobbegong attacks this time around. The grey nurses were skittish, and tails could be heard cracking all through the dive. At 23deg, 28m and 30min bottom time, this dive was well worth the effort, despite the poor visibility on the bottom. After a good dive interval, we dropped in at outer Latitude Reef. Marine debris surveys turned up fishing line and hooks, but the roaming search found lots more - including a couple of large anchors and length of heavy gauge chain which were too big to recover. The water was dirty here, around 5m visibility, but a lovely dive with plenty of fish life, a gorgeous little green turtle and loads of wobbegongs lurking in the kelp. At 18m, 40minutes bottom time was more than enough. A great day had by all. 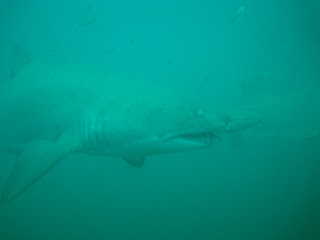 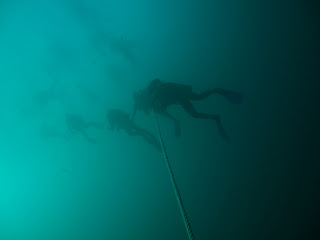 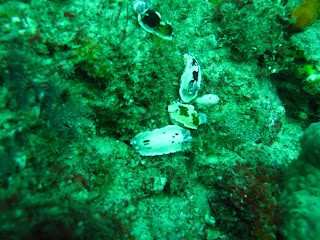 Posted by Great Lakes Underwater Group at 12:42 AM No comments:

March and April are the best times to dive the mid north coast. The weather and the waters are still warm and seas are settled which means optimum visibility. Six members of the Great Lakes Underwater Group (GLUG) left the jetty with the sun shining and the bar reasonably calm.
At The Graveyard site each took a giant stride off the boat into clear warm water. Peter Trood, Heather Armour and Janne and Tony Moran, to perform transects for two areas whilst Anita and Greg Toland were to do Spot a Shark monitoring using cameras with laser beams. The tapes were to a rock and ran the obligatory 25 metres in a straight line, then the divers slowly swam back along to monitor for marine debris. An old anchor with a chain was found on the first transect but nothing in the opposite direction so random searches were commenced. Later a fishing rod and a fishing lure was found amongst the kelp. Also spotted were a large numb ray and a Port Jackson Shark but no grey nurse sharks. Total dive time was 46 minutes with a maximum depth of 17.8 metres. 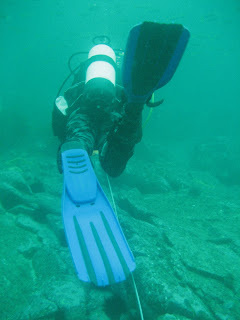 tony laying the transect line at Graveyards
After a surface interval the boat motored over to the second site, Charlottes Reef just off Shelly Beach. The water was shallower this dive so a slight current was evident and the visibility was down. Again transects were taken with no marine debris found. After a short time however near the rocks fishing line, sinkers, hooks, rope and plastic netting were retrieved as well as a surfboard fin. A large anchor with chain was sighted but could not be retrieved so several photographs were taken. Several house bricks were also sighted. Three more numb rays were lying amongst the rocks. Total dive time was 52 minutes with a maximum depth of 9.8 metres. Water temperature was 21 degrees. 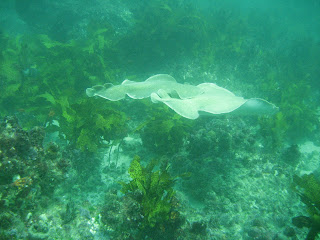 
Posted by Great Lakes Underwater Group at 6:01 PM No comments:

With awful conditions on the last GLUG dive, we were all glad to see the water clear up at last.  Anita, Tony and I decided to checkout the Baitgrounds and after some minor (some might say major!) technical hitches, we were pleasantly surprised by relatively clear, warm water (variable 10m viz, 22deg).  We completed 4x25m transects in quick time on account of there being no debris to collect!  The rest of the dive was spent meandering around the inner reef, searching for random marine debris and endangered species.  This near-shore reef system is comprised on a number of kelp-covered, elongate reefs that run E-W, surrounded by sand.  We were surprised that, given the water temperature, we did not see any grey nurse sharks.  This is normally a popular location with nurses.  Neither did we see any turtles.  Only a large wobbegong and an eagle ray; and lots of brightly coloured juvenile girdled parma, moon wrasse and Gunthers butterfly fish.  A pleasant morning was had by all, but we all resolved to revisit the site again soon to check on those sharks!
Posted by Great Lakes Underwater Group at 9:58 PM No comments:

Fog on the ground in the early morning was a good sign for the day ahead. Dead flat seas made for a smooth ride out to The Barge and ideal conditions to spot dolphins swimming about enjoying themselves. Descending down the anchor was initially murky but on the seabed the entire barge was visible plus the reef next to it. The Barge was a garbage barge that was sunk deliberately as a dive site. As soon as we reached the anchor a two metre male grey nurse cruised by for a photo opportunity. Another male measuring 2.5 metres also swam passed for our camera. We peered down holes in the barge and performed roaming marine debris surveys. Two stubby beer bottles were found, one was retrieved however the other was inhabited and left behind. Also sighted were red morwong, jewfish, eastern hula fish, maori wrasse, beardies, sweep, yellowtail scad, traglin, pike, crested morwong, blue grouper, mado, balling catfish, brown catfish, white faced pullers, crimson banded wrasse, yellow catfish, old wives, orange seastars, girdled scalyfin and bullseyes. Maximum depth was 28 metres with a water temperature of 20 degrees. After a surface interval we headed over to The Baitgrounds. This dive we were able to perform roaming marine debris surveys in straight lines of 25 metres, as the reef was small and surrounded by sand. We soon found a fishing line with two hooks and a sin

Posted by Great Lakes Underwater Group at 1:59 PM No comments:

Great Lakes Underwater Group
Forster, NSW, Australia
Great Lakes Underwater Group is a volunteer underwater research group comprised of SCUBA divers from the Great Lakes Area on the mid-north coast of New South Wales, Australia. Our projects to date have included the development of a local fish inventory; documenting local endangered fish, such as the grey nurse shark, black cod and turtles, working with other research organisations, such as Spot a Shark and Reef Life Survey. Our current project is focused on monitoring and removing marine debris from local reef systems in the Great Lakes Area. 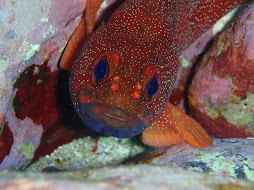